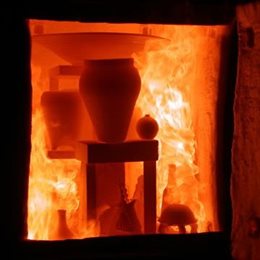 A kiln is a thermally insulated chamber, a type of oven, that produces temperatures sufficient to complete some process, such as hardening, drying, or chemical changes.
Kilns have been used for millennia to turn objets made from clay into pottery, tiles and bricks.
Kilns are esential part of the manufacture of all ceramics. Ceramics require high temperatures so chemical and physical reactions will occur to permanently alter and unfired body. In the case of pottery, clay materials are shaped, dried and the fired in a kiln. The final characteristics are determined by the composition and preparation of the clay body and the temperature at which it is fired.

Brand: Nabertherm
Ceramic firing oven with an attractive design and a top door for easy loading. Excellent cooking, ideal for hobby or workshop.
Optional equipment and features on the item's file.