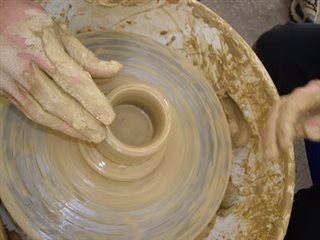 In potter, a potter's wheel is a machine used in the shaping of round ceramic ware. The wheel may also be used during the porcess of trimming the excess body from dried ware, and for applying incised decoration or rings of colour.
A potter's wheel may occasionally be referred to as a "potter's lathe".
We have a wide range of materials for cerámic work in our store. Discover them!

Brand: Shimpo
Its lightweight, compact design makes it easily portable; and yet its 10Kg centering capacity makes it a permanent addition to any studio or classroom.
Compact tabletop and lightweight potter's wheel.
£423.10 + VATLow Stock

It´s lightweight, compact desgin makes it easily potable; and yet its 10Kg centering capacity makes it a permanent addition to any studio or classroom.
Tabletop potter´s wheel with foot pedal regulation.
£511.67 + VAT

Brand: Shimpo
AVAILABLE IN JULY. Reserve your potter's wheel by buying it now!
The Direct Drive motor is a brushless, beltless motor that operates on a magnet system and is electronicaly controlled. As a result, the motor is extremely quiet.
Click on the article to see technical characteristics
£1,210.87 + VAT

Brand: Shimpo
AVAILABLE IN SEPTEMBER. Reserve your potter's wheel by buying it now!
The new design offers endurance, power and silence. With only 30dB is the most quiet potter's wheel in the market.
Professional Potter's wheel
£919.69 + VAT

Brand: Shimpo
AVAILABLE IN JULY. Reserve your potter's wheel by buying it now!
Designed with the potter in mind, the Shimpo RK-55 is a belt-driven lightweight wheel. Featuring a remot pedal.
Click on the image for see article characteristics.
£648.31 + VAT

Brand: Shimpo
AVAILABLE IN JULY. Reserve your potter's wheel by buying it now!
The RK-3D represents the next generation of potter'swheel. Responsive, high torque at all speed, powerful and quiet. Professional quality.
Click on the image to see article characteristics