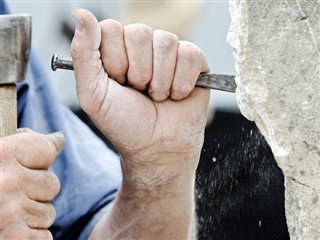 Stone carving is an activity where pieces of rough natural stone are shaped by the controlled removal of stone.
Stone can be dug from the surface and carved with hand tools. Stone is more durable than wood, and carvings in stone last much longer than wooden artifacts. Stone comes in many varieties and artists have abundant choices in color, quality and relative hardness.
Set of tools for stone carving. Chisels for stone, maces, steel burs and scraper for marble and widia chisel. Tools for stonemasons and stone craftsmen.
Showing from 1 to 12 of 12 items

Piccolo for grinding and carving

Brand: Artistix
The combination of a Pick and Bush Hammer has the grat advantage that the surface can be worked on with the Pick and by turning the Hammer around you can crush and even out the surface.
From £21.91 + VAT
View options

Brand: Artistix
The thoothed stone axe is used to easaly ship away at the edges of the stone. Available in 3 different formats.
From £23.53 + VAT
View options

Brand: Artistix
Set of 12 chisels with 15cm length for soapstone carving (till hardness 2).
Presented in a design box.
£12.06 + VAT